Are Ancient Coins Mentioned in the Book of Mormon?

By Bill McKeever and Eric Johnson 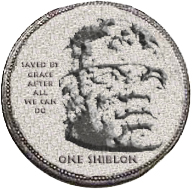 There are a number of coins mentioned in the Bible, including the
denarius, the lepton (widow’s mite), and the shekel. While the nicer
coins are marked at a premium, many are common coins and can be
purchased for a few hundred dollars. For instance, there are hundreds
of thousands of authentic widow’s mite coins from 2,000 years ago; in
fact, an authentic coin referred to by Jesus in Luke 21:2 can be
purchased for just a few dollars in a coin shop or on the Internet.

Some have criticized the Mormon Church for its failure to
provide evidence for any Nephite coins. But should we really expect the
LDS Church to produce them? Coinage in the Western Hemisphere during
the Book of Mormon
time period was unknown. The use of coins did not become popular until
the sixteenth century, more than a millennium after the last Nephite
had allegedly died. However, the problem does not lie in a lack of
Nephite coins. Rather, it lies in Joseph Smith’s implication that such
coins existed in the first place.

According to Smith, the Book of Mormon states in Alma 11:4, “Now these are the names of the different pieces of their gold, and of their silver, according to their value.”
Verses 5-19 list several measurements of gold (senine, seon, shum and
limnah) and silver (senum, amnor, ezrom and onti). In lower numbers,
there were shiblons (worth half a senum), shiblums (half a shiblon),
and leahs (half a shiblum). This, according to Alma 11:20, was the
measurement of money that the people received for their wages.

The introduction to Alma chapter 11 states that these are “Nephite coins and measures.”
This explanation comes to us via James Talmage, a Mormon apostle who
was commissioned to add both chapter headings and footnotes to the Book of Mormon. James P. Harris, author of The Essential James E. Talmage, noted that Talmage “was customarily meticulous, making sure there were no errors or omissions” (p.xxix).

If these items are actually coins, shouldn’t archaeologists expect to find evidence of them as places thought to be Book of Mormon
lands are unearthed? In the many ruins uncovered in the Middle East,
archaeologists are able to date their findings by the numerous coins
they normally find in the same level of their dig.

However, since no Book of Mormon coins have been found, a common LDS response is to dismiss Talmage’s explanation altogether.

BYU professor Daniel C. Peterson states, “It
is, alas, quite true that there is no evidence whatsoever for the
existence of Book of Mormon coins. Not even in the Book of Mormon
itself. The text of the Book of Mormon never mentions the word ‘coin’
or any variant of it. The reference to ‘Nephite coinage’ in the chapter
heading to Alma 11 is not part of the original text, and is mistaken.
Alma 11 is almost certainly talking about standardized weights of
metal—a historical step toward coinage, but not yet the real thing” (Review of Books on the Book of Mormon, 5:55)

Mormon apologist Michael Griffith agrees. “Nowhere
in the Book of Mormon is the use of coins even mentioned. The term
‘coins’ in the chapter heading to Alma 11 is a mistake of modern
editing, not a part of the original text itself” (Refuting the Critics, p. 60).

Peterson and Griffith’s analysis seems to understand how damaging it
would be if Alma had been referring to actual coins. Commonly used
coins in any culture always have a way of showing up. They don’t just
disappear entirely from the face of the earth. This compels the Mormon
apologist to say that these references were merely weight measurements
and would not be something that could be discovered on an
archaeological dig. But there are several serious flaws with this
rationale.

First, the LDS Church has seen no reason to delete or modify
the introduction to Alma 11 despite the protests from the above–named
laymembers. It reads the same today as it has since 1920. If coinage is
not meant, it seems strange that the church would continue to print
this particular heading. On this point alone, the LDS apologist’s
conclusion seems presumptuous since this introduction to Alma 11 was
obviously approved by the LDS First Presidency.

Second, for decades this passage has been understood by
Latter-day Saints to speak of coins. For example, B.H. Roberts, a
highly respected LDS Seventy and church historian, wrote, “In addition to these words we have also a number of names of Nephite coins and the names of fractional values of coins…” Roberts proceeds to explain the different values, often using the term “coins” to describe them. Though Roberts says “we
have no means of obtaining specifically the value of these coins in
modern terms,” he adds that “there is stated a system of relative
values in these coins that bears evidence of its being genuine” (A New Witness for God, 3:145).

Finally, we disagree with Dr. Peterson’s claim that no variant of the word coin is used in the text. Taking his advice that Noah Webster’s 1828 American Dictionary of the English Language is perhaps “our best source for the language of Joseph Smith and his contemporaries” (Review of Books on the Book of Mormon,
5:8) we find that under the word “piece” (the word Smith used in Alma
11:4), there are several definitions. However, none of them have any
meaning that would fit Alma 11:4 until the eighth definition: “A coin; as a piece of eight.” The meaning for “piece” in Joseph Smith’s day was coin.

This rule is followed in the 1979 Book of Mormon Student Manual (Religion 121-122) when it asks students “how valuable were the Nephite pieces of money?” Showing that “pieces” meant “coins,” the manual presents a chart to show “the relative value of silver and gold coins under the system set up by Mosiah.”

History shows that there was no coinage in the Western world during the
supposed time of Nephites and Lamanites despite the fact that there
should be if the Book of Mormon
is an actual history of real people and real events. Mormon apologists
can haggle over the absence of the word “coin” all they want, but the
fact remains that the language of Smith’s day and how these passages
were understood clearly show that Alma 11 is referencing ancient
Nephite coins. This issue of coinage is just one of a number of areas
that can be used to show that the Book of Mormon is a product of Joseph Smith’s nineteenth century world and not an ancient document.