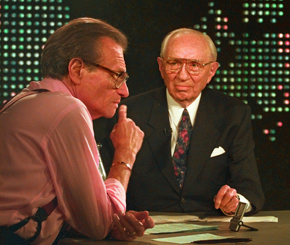 Gordon B. Hinckley, 15th prophet, seer and revelator of The Church of Jesus Christ of Latter-day Saints, died on January 27, 2008. He was 97 years-old.

After serving as a missionary in Great Britain in the mid-1930s, Mr. Hinckley spent most of his life in the employ of the LDS Church. After his mission he rose to the top leadership circle in the Church; named successively as a General Authority (1958), Apostle (1961) and member of the First Presidency (1981). Mr. Hinckley was called to the position of President of the Church at the age of 84 on March 12, 1995, following the death of Howard Hunter. He was the fifth-longest serving LDS Church President in history.

There are several milestones associated with Mr. Hinckley’s Church service:

In October of 1997 Gordon B. Hinckley announced a new temple-model for the Church. Rather than the large, costly traditional LDS temples that were relatively scarce around the world, Mr. Hinckley announced that smaller, less expensive temples were to be built. This would allow for the construction of more temples in more locations, making temples increasingly accessible to a greater number of Church members. Under Mr. Hinckley’s leadership the number of operating temples increased from forty-seven to 124.

Gordon B. Hinckley’s management of the Church was notable for many other achievements as well. Under his direction:

Mr. Hinckley was also known for his open accessibility to the secular news media. He granted more public interviews than had been the habit of previous Church presidents, giving the LDS Church needed exposure to “bring it out of obscurity” and into the public’s consciousness in a favorable way. He appeared on the network news program 60 Minutes, and appeared repeatedly on Larry King Live. He gave interviews to the New York Times, the Los Angeles Times, and the San Francisco Chronicle. However, not all media contact was positive for President Hinckley.

In 1997 Gordon B. Hinckley was interviewed by religion writer Richard Ostling for TIME magazine. In the course of the interview Mr. Hinckley was asked about the LDS doctrine that God the Father was once a man; a question Mr. Hinckley did not care to answer forthrightly. In his response, according to the reporter, Mr. Hinckley sounded uncertain about the doctrine, saying that he didn’t know much about it. The Prophet’s uncertainty regarding a basic doctrine of the Church caused concern among LDS members, which Mr. Hinckley addressed at the following General Conference. To set minds at ease, he claimed he had been misquoted and the exchange had been incompletely reported. TIME magazine responded to this charge by making the transcript of the interview public, proving that the magazine had fairly and accurately reported Mr. Hinckley’s remarks.

Another bit of controversy in Mr. Hinckley’s Church career took place before he was named President, but while he served in the First Presidency of the Church. In the mid-1980s Mr. Hinckley, acting on behalf of the LDS Church, acquired what he believed to be sensitive, authentic documents related to LDS Church history. Later these documents were exposed as forgeries, created by the infamous LDS forger Mark Hofmann. The fact that Mr. Hinckley had been duped by Mr. Hofmann caused the claimed inspiration of LDS Church leaders to be called into question.

Gordon B. Hinckley often spoke of his love for the LDS Church’s founding prophet, Joseph Smith. In a conference message given on April 3, 2005, he remarked how, “As a boy I loved to hear a man who, with a rich baritone voice, sang the words of John Taylor: The Seer, the Seer, Joseph, the Seer! . . ..” This LDS hymn contains words that are especially troubling to Bible believing Christians for it applies attributes to Joseph Smith that are clearly those of Jesus. For example, speaking of Joseph Smith the lyrics state:

A few years ago Mr. Hinckley said of Joseph Smith: “I look to him. I love him. I seek to follow him. I read his words, and they become the standards to be observed in guiding this great Church as it moves forward in fulfilling its eternal destiny” (Church News, 12/13/2003, p.3). Therefore, it seems fitting that Mr. Hinckley expressed his eternal hope in these words: “…in the natural course of events, before many years, I will step across the threshold to stand before my Maker and my Lord and give an accounting of my life. And I hope that I shall have the opportunity of embracing the Prophet Joseph Smith and of thanking him and of speaking my love for him” (quoted in Ensign, 7/1999, p. 39).

On the Death of the Mormon Prophet