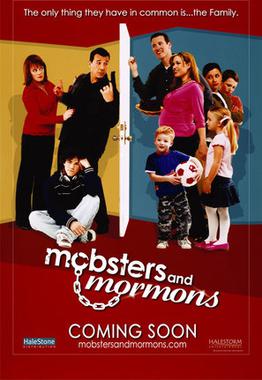 If our oversensitive culture has robbed you of being able to laugh at typically funny stereotypes, then Mobsters and Mormons may be a film you may want to bypass. If you don’t fall into that category, have a good sense of humor, and are somewhat familiar with both the Mormon and Italian culture, you will find watching Mobsters and Mormons to be a hilarious experience.

On opening day my wife and I joined two Christian friends to catch the first showing. Given the genre of the film, it is probably safe to say that we were the only “Gentiles” present. Now you have to understand, my wife is 100% Italian; over the past 30+ years of marriage, we have probably exchanged more Italian and Irish jokes than can be counted. Being touchy about our heritage is not a problem in our home. I would venture to say this is true about writer/director John Moyer (who plays a bit part as Agent Tuttle). The film zeros in on just about every Mormon stereotype imaginable, although I don’t recall any green Jell-o jokes.

There are a couple of scenes that I think some Catholics might find troubling. While the church segments in the local Mormon chapel depict a friendly and well-attended environment, the two scenes during a Catholic service show a priest performing Mass to a virtually empty building. Hyperbole to this degree may have been a tad unnecessary.

The plot involves an Italian mobster by the name of Carmine “The Beans” Pasquale (Mark DeCarlo). His moniker comes from the fact that he loves a good cup of coffee and grinds his own beans. In order to spare himself from going to prison, he testifies against his mob boss and then is put into the Federal Witness Protection program. Carmine, his wife Gina (Jeanette Puhich) and son Vincent (Clayton Taylor) are relocated to Utah and renamed George, Linda, and Patrick Cheeseman. The clash of cultures is what makes the film so funny.

A scene my wife and I particularly related to involved “Linda” trying to buy copocolla ham at a local grocery store. None of the clerks knew what she was talking about. My wife and I had the same experience when we moved to Utah. (Should you be interested, Tony Caputo’s Market and Deli caries it at 308 W 300 S in downtown Salt Lake City.)

“George” is a very outspoken easterner whose innate rudeness causes him to have no problem lobbing insults at his Mormon neighbors, many of whom find his crass mannerisms a reason to purposely distance themselves from him and his family. Even when he tries to be a good neighbor his mafia lifestyle comes to the top. Pay particular attention to his rendition of the “Three Little pigs.”

Michael (Scott Christopher – the BBQ chicken guy in Single’s Ward) and Kate (Britani Bateman) Jaymes try to overlook the big-city family’s idiosyncrasies and do their best to befriend them. Michael is filling in for the bishop of his local ward, and his friendship with the “Cheesemans” is seen by some of the more prejudiced in his congregation as a reason to question his leadership. This becomes the moral of the story. “George” certainly notices how he and his family have been slighted by his Mormon neighbors. In an effort to console his friend, Michael Jaymes confesses to “George” that while Mormons believe their church is true, not all Mormons behave like good Mormons. The script attempts to clarify misconceptions about Mormons (and Mormonism) while at the same time it takes a bold step to show that Mormons are anything but perfect. I think we can all be honest enough to agree that this is a characteristic we find prevalent in every religion.

If you already understand that not all Mormons are conceited snobs and that not all Italians are gun-toting gangsters, you should really enjoy the parody in this film. Expect a lot of funny lines and a not-so-predictable ending.

Before seeing Mobsters and Mormons, I’ve always considered Singles Ward to be my favorite Mormon-genre film. However, the latter has now been bumped to second place. I look forward to getting the DVD.