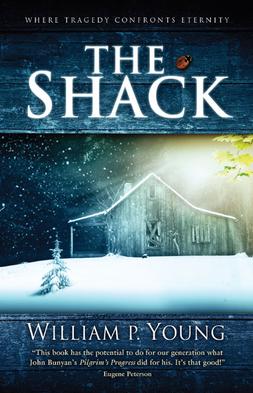 Very similar to the Harry Potter phenomenon, The Shack (written by William Young) has been acclaimed by many, including Evangelical Christians. First printed at a copy shop and handed out to Young’s friends and relatives, the book has been atop the publishing charts for more than a decade. A movie based on the book starring Sam Worthington was released in the United State opened on March 3rd, 2017 and is certain to be viewed by millions of people.

What is it that makes this story so compelling? I believe bringing the three Persons of the Godhead to an almost-human level intrigues many readers. Many times I have heard people say something like this: “If only I could just see God face-to-face, just like Moses, then I would believe.” Based on a tragic murder, The Shack was intended to help believers understand in a metaphorical sense how God feels when traveling through the tough times and His desire to have a personal relationship with people, even when bad things happen to good people.

I believe there are three positives that can be taken from this book. First of all, The Shack depicts how God desires a relationship with His people because He loves us. God doesn’t just want His people to be followers of a bunch of rules of some man-made religion. He also doesn’t want us to come into this relationship as a result of force, like some type of divine rape. Second, Young does a good job explaining evil, that it is not something that is created but is rather the absence of good. Finally, the book helps explain why true forgiveness does not hold on to the past. When the main protagonist (Mack) is confronted with having to forgive his daughter’s killer, he realizes that the hatred he had in his heart for the serial murderer was actually detrimental to his own sanity. Forgiveness frees the forgiver instead of allowing the person to be tortured with lingering hatred.

Despite these three points, I cannot recommend The Shack for four reasons:

1. It presents a low view of scripture. According to the worldview portrayed by the author, the importance of studying God’s Word to find out His will for us today is deemphasized. Rather, he encourages personal revelation. Mormonism does the same thing: Just pray about whether or not the Book of Mormon is true, and God will make it manifest by a peace and comfort in our soul. But does it really work like that? Actually, God’s written Word is the only trustworthy source for revelation to humankind. It alone teaches everything that is necessary for salvation and is the standard for us to know Truth. Over and over again, the Bible testifies to its own uniqueness and sufficiency (i.e. 2 Tim. 3:16; Ps. 19:7; 2 Tim. 2:15).

2. It presents a low view of God. This takes place in several ways. One, it moves God to a human level. Of course, the story is fictional, so there are certain leeways that the reader must concede. But when Papa (God the Father) is likened to a heavyset black woman who says “Sho’ Nuff” and displays other stereotypical traits, such as when “She” is listening to “funk” and seems to relate with the things that some of “Her” “kids” are “showin’ and spoutin’ off” as well as when Mack continually uses a number of four-letter words in the presence of the all-holy and almighty God, the essence of the very being of God has been lowered to the point of blasphemy.

In addition, Young’s modalistic view of the Trinity (Papa has scars in His wrists but Jesus doesn’t?) is skewed. Young portrays the Father as being Jesus as being the Holy Spirit. But this is a distortion of the Holy Trinity and could be very confusing for the average Christian.  How well can most readers recognize this very ancient heresy? If you read the hundreds of reviews on Amazon where the testimonials abound explaining how this book has revolutionized their view of God, then I believe Young does an incredible disservice to the Christian community.

3. It presents a low view of the local church. According to the picture that is painted, the local church is nothing more than a “religion and institution” that has become irrelevant to the 21st century. If you were to believe Young, it seems almost better to go it alone, just Papa and you. But the Bible clearly teaches that we are not to “give up meeting together” (Heb. 10:25) with other believers. Just like the disciples did in Acts 2:42, Christians should be devoted to each other. I believe the local church can still be relevant today, so the proverbial baby does not have to be thrown out with the bath water.

4. It presents a low view of salvation. While Young is not necessarily a Universalist (accepting all religions are true), he utilizes some statements throughout that make it appear this is so. On page 192, Papa says that “through (Jesus’) death and resurrection, I am now fully reconciled to the world.” The book says that He loves everyone equally the same. Young also says that there is no punishment for sin; rather, “sin is its own punishment, devouring you from the inside.” While God is certainly a loving and merciful God, He is also a God of justice. This aspect is entirely lost by Young in his distorted portrayal of salvation.

With these four points taken into consideration, The Shack should be avoided. While I understand that it was certainly written as fiction, it is bound to confuse a Christian lay audience with its theological inconsistency and will likely cause sincere readers to accept wrong views of important issues related to Christianity. With so much good Christian fiction (or just good Christian books that develop one’s relationship with God, e.g. Tozer, Lewis, and many others) with much more accurate depictions of God, I’m not sure why we should spend time with a book that discounts the Personhood of God.

This review was not meant to be exhaustive but more of an overview. For more details, check out the links given below.

See a review from the Christian Research Journal by clicking here.

For a review of the movie (the reviewer did not read the book), click here.

For an insightful 2008 review of the book by Al Mohler, click here.

When a Myth About Mormonism Turns Out to Be True

Review: Crossing the Divide from Baptist to Latter-day Saint